Do it do it

Written, recorded and mixed on an iPhone 6 Plus
(no other instruments or equipment was used)
Author: @franccarreras
Download mp3 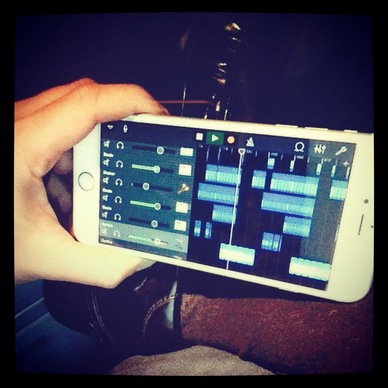 SONG FACTS:
Time: Written, recorded and mixed between Feb 7 and Feb 14, 2015
Total budget:  $0,99
Location: KLM Boeing 777, Intercontinental hotel and a Beneteau sailboat.
Instruments: apple iphone 6 plus, garageband software and RED loop pack ( $0,99)
Recording notes: The iPhone 6 was able to handle a total of 25 tracks (10 instrumental and 15 vocals) simultaneously without crashing once. Despite the song having drums, guitar and keyboards no actual instruments, amps or effect processors were used. All sounds are available on any iPhone 6 with the exception of the RED loop pack which was bought for $0,99. The only microphone used to record vocals was the iPhone's.

About the author: Former record executive doing digital marketing for Sony Music in NY quit his job to sail across the Atlantic to Europe. There, he started a social media marketing agency and teaches digital marketing in several cities around the world. Living on a sailboat and constantly traveling for work made it impossible to use his spare time to make music. That was until the iPhone 6 plus came along and this song came to life during a transatlantic flight.

There are no more excuses for creative people. If he could create "do it do it" so can you!